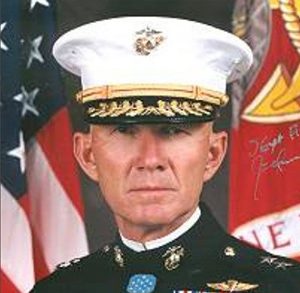 Major General James E. Livingston retired on September 1, 1995 following over 33 continuous years on active duty in the United States Marine Corps. His last assignment was the Commander of the Marine Forces Reserve in New Orleans, Louisiana.

He was commissioned a Second Lieutenant in June 1962, following graduation from Auburn University. Early assignments included service as a Platoon Commander, Intelligence Officer, and as a Recruit Training Regiment Series Commander.

Promoted to Captain in June 1966, General Livingston served as the Commanding Officer of the Marine detachment aboard the aircraft carrier USS Wasp, before joining the 3rd Marine Division (Reinforced) in the Republic of Vietnam in August 1967.

On May 2, 1968, while serving as the Commanding Officer, Company E, 2d Battalion, 4th Marines, he distinguished himself above and beyond the call of duty in action against enemy forces and received the Congressional Medal of Honor.

After his second tour in Vietnam, General Livingston served as an instructor at the Army’s Infantry School, Director of Division Schools for the 1st Marine Division, and, later, as the S-3 for 3rd Battalion, 7th Marines. In March 1975, he returned to Vietnam and served as the Operations Officer for the Vietnam evacuation operations which included Operation “Frequent Wind”, the evacuation of Saigon.

He then commanded the Marine Barracks, United Kingdom, London, and served as the Commanding Officer, 3rd Recruit Training Battalion, then as the Assistant Chief of Staff for Operations and Training at the Marine Corps Recruit Depot, Parris Island, South Carolina. During this period, he earned a master’s degree in Management from Webster University. General Livingston then served with the 2d Marine Division and commanded the 6th Marines before joining the Joint U. S. Assistance Group in the Republic of the Philippines.

Following advancement to Brigadier General on June 10, 1988, he served as Deputy Director for Operations at the National Military Command Center in Washington, D.C. During Operations Desert Shield and Desert Storm, General Livingston commanded the Marine Corps Air Ground Combat Center, 29 Palms, California, and developed the Desert Warfare Training Program. After commanding the 1st Marine Expeditionary Brigade, he was advanced to Major General on July 8, 1991 and assumed command of the 4th Marine Division (Reinforced). In July 1992 he assumed command of the newly created Marine Reserve Force, and continued through its reorganization in October 1994 with its new title, Marine Forces Reserve.

Major General Livingston retired from the Marine Corps in 1995. In retirement he served as a Board Member and Chairman of the National World War II Museum Foundation in New Orleans, Board Member of First Bank & Trust, New Orleans, Bank of Amite, Amite, LA, and Columbus Data, Dallas, TX, an ATM processing company where he was also a minority owner.